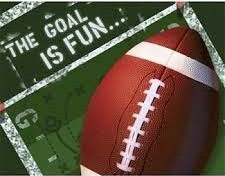 This past weekend kicked off the 2015–16 NFL football season (and for high school football season too)! For most of us here in the office – football means time with friends, some great tailgating food and SCIENCE FUN! Yes, that’s right science and fun go together.

We’re going to stay out of the “Deflate Gate Debate” and focus on other physics laws:  Newton’s Laws of Motion. Yes, we thought we were being original when we posted yesterday about the science of football and planned to write about Newton’s Laws of Motion…then we did a quick search. Turns out the National Science Foundation beat us to it!  They’ve completed a 10-part series on the “Science of NFL Football” themed entirely around Sir Isaac Newton (a complete video bio on this awesome scientist).

TEACHERS:  If you’re covering Sir Isaac Newton’s Laws of Motion this semester in Physics or another science class, this is a great video series to leverage in your classroom.

Newton’s laws of motion are three physical laws that together laid the foundation for classical mechanics. They describe the relationship between a body and the forces acting upon it, and its motion in response to said forces.  Check out the video below and learn about Newton’s First Law of Motion – “Law of Inertia.”

Wishing your teams the best of luck this football season!